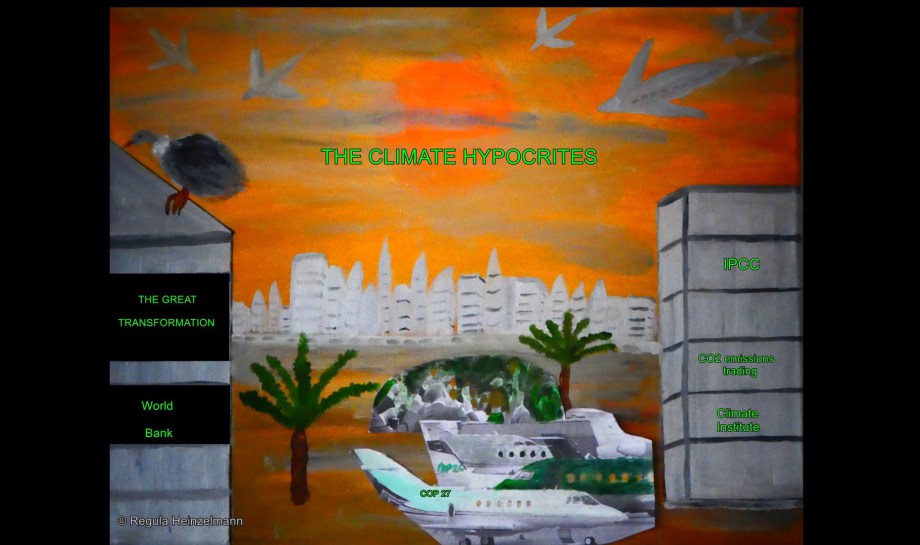 The business with the CO2 thesis

The politicians arrive by private jets to the climate conferences, but they want the money of the West. The EU and its Member States are the largest contributors to international public financing of climate action.

A global redistribution of financial resources was already provided for in the Potsdam memorandum in 2007. This was called #GreatTransformation, not a conspiracy theory, even if the word seems like it. The costs were calculated over 10 years ago - 1,000 billion US $ per year until 2030, afterwards more. The money could be better used for real environmental protection, e.g. to make environmental technology available worldwide. We are still a long way from that.

There is a lot of theses and contributors about the climate and no agreement on the CO2 thesis, although this is always claimed. But the CO2 thesis is a business for NOGs, Politicians (CO2 taxes), climate institutes (collects millions € taxpayers annually), CO2-certification dealer, the media and so on. We need an open discussion without discriminating against climate policy critics.

For environmental management we need sewage treatment plants, filters, recycling and protection of forests and seas, worldwide. Much money for "climate protection" would be much better invested in real environmental projects in the developing countries.

The precondition for environmental protection is a functioning economy with a strong middle class. Environmental management does not work with poverty or socalsm.

War and Corona are enough: But the IPCC is once again spreading panic.

While we can be happy to get 10 days of proper weather forecasts, the IPCC claims it can predict climate change for decades.

There are so many theses about the climate that scientists have to admit: Longer-term forecasts are impossible!

But critics of the IPCC have been discriminated for years.

Svante Arrhenius (1859-1927), physicist, chemist and Nobel laureate, a relative of Greta Thunberg, developed the CO2 thesis, which was refuted during his lifetime. By the way, he judged the global warming positively, there would be fewer crop failures and famines. There are many counter-theses, but critics of the IPCC have been systematically discriminated for years.

Even an ordinary weather forecast requires high-performance computers to process the complex amounts of data. A longer-term prognosis I therefore consider impossible, by the way, also for the scientists who criticize the co2-thesis.

IPCC and the critical institutions

The leading representatives of the CO2 thesis are the members of the ICPP, also called a global climate. The intergovernmental Committee on Climate Change (IPCC) was launched, according to the official declaration, to provide decision-makers and other climate change an objective source of information about climate change. The IPCC provides its reports at regular intervals to politicians, and they will immediately become standard reference works that are used intensively of politicians, professionals and students. The IPCC reports form a crucial basis for climate conferencing.

The official requirements for IPCC reports

"They should be politically neutral, although they have to deal objectively with politically relevant scientific, technical and socio-economic factors. They should satisfy high scientific and technical standards and, as far as possible, reflect a variety of opinions and expertise and a broad geographic distribution."

These requirements have never met the IPCC reports, otherwise they would also have to quote the critics. On the contrary, these are systematically discriminated against for years. If the representatives of a ruling doctrine need that, something is lazy, that was always in the world history.

Of course, the organizations that propagate the climate is governed by state. That costs millions annually. For example, the Potsdam Institute is financed to equal parts of the federal government and country. In 2016, the institute received a total of about 11.7 million euros of institutional promotion, which came about 10.4 million euro third-party funds for research projects. Research at the PIK is organized in four interdisciplinary research areas.

The Nongovernmental International Panel on Climate Change (NIPCC) is an international panel of nongovernment scientists and scholars who have come together to present a comprehensive, authoritative, and realistic assessment of the science and economics of global warming. Because it is not a government agency, and because its members are not predisposed to believe climate change is caused by human greenhouse gas emissions, NIPCC is able to offer an independent “second opinion” of the evidence reviewed – or not reviewed – by the Intergovernmental Panel on Climate Change (IPCC) on the issue of global warming.

Nongovernment International Panel On Climate Change = NIPCC, also called the international non-governmental commission for climate change. In 2003 there was a meeting in Milan, in which the basic idea was developed to the NIPCC. In 2007 she was then founded under this name.

The European Institute for Climate & Energie E.V. (Eike). This is a merger of natural, mind and economists, engineers, publicists and politicians. Eike was founded in February 2007 and finances itself from voluntary contributions of its members as well as donations. EIKE offers the members and partners a platform for the discussion and publication.

In history, ice times for people were always a big problem, this is in one of the most interesting books on the subject, of the former ETH Professor Kenneth J. Hsu. Unfortunately you get the book only antiqar.

The parties CDU and Greens in Baden-Württemberg want to build 1000 new wind turbines. Wind shrouds are not environmentally friendly, they kill birds and insects, shit landscapes and for the creation you need a lot of gray energy.

Also in Hessen Green Ministers approved the deforestation of forests for wind turbines and a piece of highway.

Wind turbines may be useful in flat land, wherever a wind blows. Otherwise, a mix of different types of energy production is recommended, e.g. Solar energy and nuclear energy.